The History of The Golden Retriever Breed

* The photo above is of the Guisachan ruins 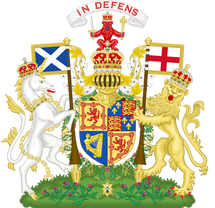 Scotland's Coat of Arms
In 1868, Nous, a Wavy-coated Retriever, and Belle, a Tweed Water Spaniel were bred together by Dudley Coutts Marjoribanks, later known as Lord Tweedmouth. From that breeding he kept two yellow females, Primrose and Cowslip and gave one male, Crocus, to his son, Edward Marjoribanks. For many decades it was thought that there was a fourth puppy, Ada, but that was subsequently determined to be erroneous. Ada was from a second mating of Nous and Belle and was given to Lord Tweedmouth’s nephew, the 5th Lord Ilchester, beginning the famous Ilchester line of retrievers. Thus it was the offspring of Nous and Belle that became the foundation of the breed subsequently known as, and now universally loved as, the Golden Retriever.

The Guisachan dogs were reportedly given only to family and close friends, all of whom were persons of means and title. Lord Tweedmouth kept copious records in the Guisachan Record Book covering 1865 to 1890, a book that only came to light in 1952 when Lady Pentland, a granddaughter of Lord Tweedmouth made it available to the noted English Golden Retriever historian Elma Stonex. In 1952, her friend, the 6th Earl of Ilchester published a famous article in Country Life which, for the first time, gave a complete and accurate history of the development of the breed. The Guisachan dogs were bred to be strong working dogs hunting grouse, partridge and deer.

There are many, many books about the early breeding of both the Guisachan and Ilchester (via Guisachan) lines, the most detailed being the 2011 epic Golden Retrievers: Research into the First Century in the Show Ring by the Australian author, Marilyn Morphet. This 1064 page tome contains a detailed history of the early breedings as well as details of the Marjoribanks (Lord Tweedmouth) family.

The Morphet epic traces the migration of the Golden Retriever from Scotland to other lands beginning as early as 1882 when Archie Marjoribanks, son of Lord Tweedmouth, took Sol to Texas where he established the Rocking Chair Ranch. He took Lady to Canada the following year where he joined the staff of his brother-in-law, Lord Aberdeen. Sol died in Texas but Lady was brought back to England by Archie in 1895. She subsequently had at least one litter.

In 1925, the first two Goldens were exported to Ireland and to India and the same year, an entire litter of Goldens was exported to New Zealand. First two  Goldens registered with AKC were in 1925 (Lomberdale Blondin and Dan Hill  Judy). A Golden made the journey to Sweden, in 1929 a Golden migrated to Switzerland and in 1930, two Goldens were exported to France. In 1932, two Goldens, including a male named Speedwell Pluto were imported to Canada. Pluto, later Can.Am.Ch. Speedwell Pluto, became the foundation sire for many North American Goldens. Holland reportedly imported Goldens in 1935, Australia in 1937, Norway in 1954, Denmark in 1957 and Finland in 1959. Today, Goldens may be found the world over and Golden Retriever Clubs from North and South America to China, Australia and beyond foster the breed’s development (See global roster of Golden Retriever Clubs in The Team).